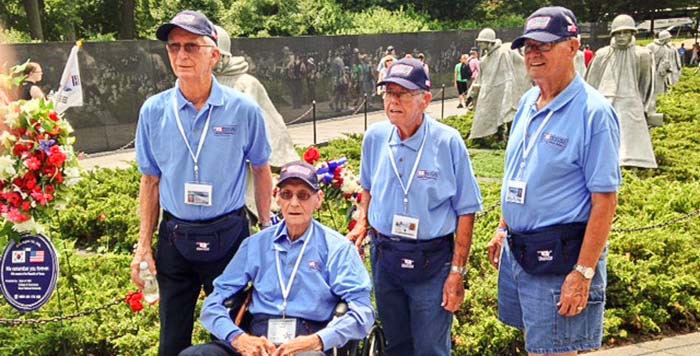 When Dallas Matthews of Haskell turned 18 in 1951, he was aboard the troop transport ship General Pope with 4,500 other U.S. servicemen, wondering if he could repel the North Korean army from the Korean Peninsula. When I turned 18 in 1981, I was completing my senior year of high school in Tulsa, wondering what I would get for my birthday. What a difference 30 years can make to an 18-year-old’s perspective.

On June 10, I was privileged to serve as Dallas’ guardian on Oklahoma Honor Flight #20 out of Tulsa. On the Honor Flight, 82 veterans of World War II and Korea were accompanied to Washington, D.C. All were in their 80s and 90s, with many wheelchair dependent.

During our brief visit to the nation’s capital, the veterans visited the World War II, Lincoln, Vietnam, and Korean War memorials. They also witnessed the changing of the guard at the Tomb of the Unknown Soldiers at Arlington National Cemetery.

Ordinarily, these veterans are fairly stoic about their service. Perhaps because they were surrounded by so many fellow vets or because of the memorials visited, Dallas and three others from his unit in Korea (Ken Choate, Homer Smith and Art Smith) provided some insight into their war experience.

Dallas and his twin brother, Denton, served in the 160th Field Artillery Regiment of Oklahoma’s 45th Infantry Brigade in Korea from 1951 to the end of hostilities in 1953. The brothers from Haskell talked their father into letting them join the Army as 17-year-olds, rather than waiting for their next birthday.

“When we got in, they told us there was no way we would serve overseas,” Dallas recalled. But immediately following enlistment, he and Denton were sent for training at Fort Polk, Louisiana, before deployment to Korea.

Upon arrival in Asia, the brothers and the rest of the troops were greeted by Siberian winds that had turned Korea into a frozen wasteland. “When we got there, it was 35 below zero, and there was four feet of snow on the ground,” Dallas recounted.

Other veterans from the 160th talked about how the bitter cold permeated every aspect of life on duty. “Our uniforms would freeze to our skin,” said Ken Choate, who also told of frozen rations, jammed weapons, and the unit’s shortage of cold-weather gear. At times it was so frigid that Dallas and the rest of his crew would risk sniper or mortar attack by pouring fuel into an empty 105 shell casing and starting a small fire for just a few minutes of relief from the arctic conditions.

Clearly, the most stirring portion of the trip was accompanying the Korean War veterans to the memorial erected in their honor. Their outpouring of emotion was overwhelming. Whether it was for the soldiers who didn’t return home, the horrors of war, or for their good fortune of having made it back and lived long enough to see their shrine, almost all of the veterans were moved to tears at the Korean War Memorial.

The Korean conflict has been labeled by some as the “Forgotten War.” Maybe that should be expected, since the war was small in comparison to World War II, began just five years after World War II ended, had almost no impact on America’s economy, and received limited broadcast and newspaper coverage. And as veterans trickled back from Korea, there was no parade and little fanfare.

To the extent that over 60 years of disregard and neglect could be made up for in one day, it was heartwarming to see the Korean War veterans recognized and appreciated by tourists at the

memorials and the National Cemetery. All of the vets at the D.C. sites were greeted by words thanking them for their service, by pats on the back, and by handshakes from hundreds of visitors, both young and old. I was particularly moved by schoolchildren recognizing the contribution of our servicemen and expressing their gratitude. This renewed my faith that America’s youth are still being taught to respect and honor our country’s veterans, particularly those who have served during a time of war.

The Department of Veterans Affairs estimated this year that 492 American World War II veterans die each day. So far, Oklahoma Honor Flights (OHF) has taken 1,846 veterans to Washington over the course of 20 flights. No veteran is charged for the flight, and not one penny of tax dollars is used to support OHF’s mission. If you know a veteran, particularly from World War II, who is able and eager to make the D.C. trip or if you would like to help, please contact OHF at: Oklahoma Honor Flights, PO Box 10492, Midwest City, OK 73140. Or phone 405-259-9000. The website is www.oklahomahonorflights.org.