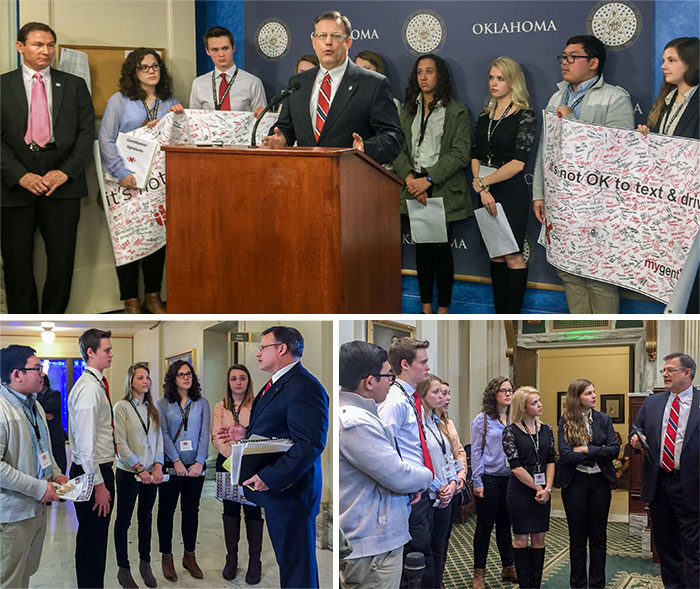 Our very own Terry O’Donnell serves as a partner at SOAWJ and a legislator for District 23.   Terry has authored and attempted to pass a bill to ban texting and driving through the legislature.   This week, the Bill passed through the House and is on its way to the Senate.   He feels very strongly about this issue and we are very excited that the bill  is on its way to become law.   He has had support from organizations like the AAA, Generation tXt, the Oklahoma Safety Council, and many other organizations and individuals.

You can see the full press release below.

OKLAHOMA CITY – A bill aimed at curbing the dangerous trend of texting while driving easily passed a vote on the House floor today.

The bill passed by a 96-2 margin on the floor of the state House of Representatives.

“I am grateful and honored of the overwhelming support HB 1965 received on the House floor today,” said O’Donnell, R-Catoosa. “The ban on texting while driving is a long-term investment into the safety of those using our roads and highways. When our state pa ssed drinking and driving laws and mandatory seatbelt laws, little changed overnight. But eventually the attitudes of drivers changes and lives were saved.”

Rep. Mike Christian, a retired Oklahoma Highway Patrol trooper, supported the legislation and said it was an important bill to support.

“The tragic accident that killed OHP trooper Nicholas Dees and seriously injured trooper Keith Burch in January was completely preventable,” said Christian, R-Oklahoma City. “It was a direct result of a driver so absorbed in his electronic media that he ran into both troopers at high speed while they were working the scene of another accident. Passing this is a fitting tribute to both troopers that this act bears their names.”

According to the Governors Highway Safety Association, 44 states currently have a texting ban on drivers.

“This has been an issue we’ve studied in the legislature for some time,” O’Donnell said. “In an interim study last year, we learned that texting while driving makes the driver 23 times more likely to be involved in an accident. According to the U.S. Department of Transportation, drinking and driving makes a driver six times more likely to be in an accident. When you compare those two stats, you have an idea of the danger texting while driving presents on our roads and highways.”

The measure now heads to the state Senate.